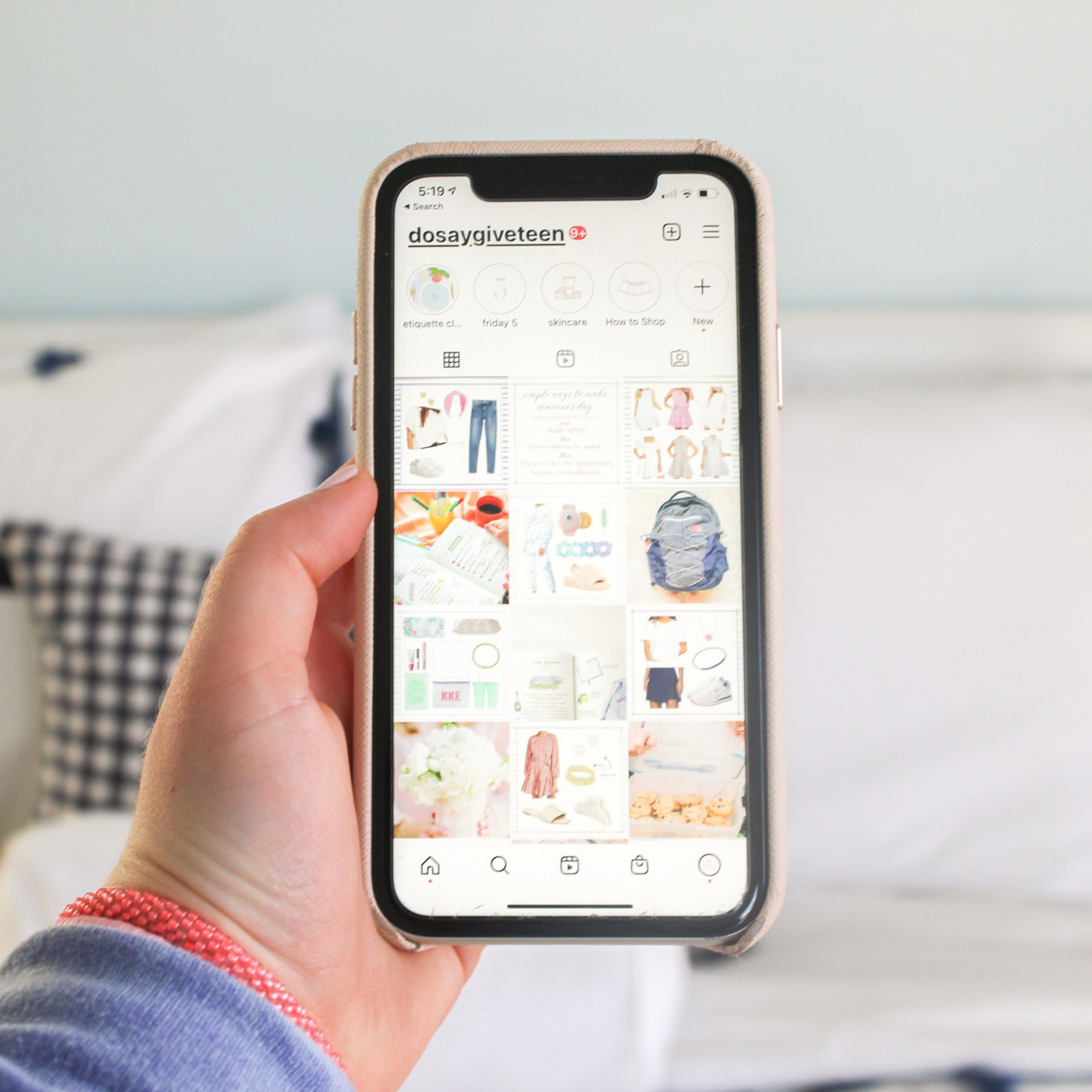 With one study showing teens spend an average of more than seven hours a day on their phones (yes, you read that right!) and much of it is on social media, it’s important to teach them the ins and outs of social media before they post their first photo. But where to start? Social media is still relatively new, so there isn’t a playbook on what to do, who to follow, or how to interact with others. (In our Etiquette Essentials for Teen Girls course, we cover all of this and more!)

So, let’s get right to it: Here is our list of the top 10 things your teen should know before getting on social media!

It’s so important that teens know not to share their location or personal information. And never give a stranger their full name in a gaming app. These might sound like no brainers, but they are common safety issues that teens face. For instance, Snapchat has a setting called “snap maps” and you may have heard of the app “Find My Friends” — both of these share a person’s location and some friends are known to share their locations with one another. Many teens include their city and high school name in their Instagram bio which anyone can see. Often parents don’t realize these things so always check the location settings of any social media app!

2. Your comments under posts aren’t private.

It’s a common thing on social media: Someone leaves a comment on a page or post that they would never say in real life. But the manners we use in real life should translate over on social media! Encourage your teens to use kindness and respect on social media. Words are powerful, and that includes our comments and DM’s! So we should never say something on social media that we wouldn’t say in person. Many teens don’t know this, but they might think that no one will see their snarking or mocking comment under a celebrity or influencer post but actually because of the algorithm their friends actually may see it!

Before posting anything, they should think about if what they’re sharing reflects you personally. Social media can be an opportunity to encourage others, and some ideas on uplifting content include: Things that are inspiring, funny memes, an encouraging quote or Bible verse, and even clothing inspiration. Remind your teen that they can be a light and update people on their life at the same time. But at the same time it’s good to have a little mystery in life. You don’t need to share everything!

Like we say in our etiquette course: “If you wouldn’t want your grandmother to see it, then don’t post it.” That includes revealing photos, inappropriate language, sarcastic comments or captions, and even the music choices for TikTok or YouTube videos. (Some teens and tweens don’t realize their song choice might have vulgar and offensive language!) It’s important for teens to understand that once it’s on social media, it’s out there forever. And could impact their life down the road when it comes college applications, sorority rush and job interviews.

Yes, teens can be impulsive. But that doesn’t mean they shouldn’t think before they post something. Some good questions they can ask themselves before posting something are:  Am I showing off to try to make my life look perfect? Is this a reflection of who I really am? What are my intentions for posting this? Would posting this make someone feel left out? On that note, cropping or photoshopping people out of photos and posting an unflattering photo of someone because you look good are not things a true friend would not do.

It’s okay to share or repost memes, photos, and graphics that someone else created on your feed! Just be sure they know to give the original creator, artist, or friend proper credit by tagging them in the photos and captions. Whether it’s a friend or a professional company, it’s always polite to do so (and, not to mention, a copyright issue).

7. It’s okay to ask someone to delete a photo of you.

Sometimes friends might post pictures with your teen that they (or you!) don’t want shared on social media. A photo in a swimsuit, for example. If they’re not comfortable with a photo being posted, they can absolutely ask for it to be deleted. And make sure they know they can always come to you for help in these matters.

It’s important for teens to know that, if they find themselves obsessing, comparing, or spending too much time on their phone, it’s okay to take a break. They can unsubscribe, mute someone, or delete any platform from their phone — and the world won’t collapse! If they’re worried about unfollowing a friend, let them know they can always mute them — the friend won’t know, and it will help create healthy boundaries (and help the friendship). It is a sign of maturity to limit time on social media apps and good to start healthy practices early in life. In our teen girl etiquette course we talk about the important of creating and contributing to society instead of just consuming. If your teen doesn’t have app limits, it might be something to implement. All iPhones have a setting to do this. As parents, we need to monitor our children’s mental health at all times and if social media is contributing to a decline in mental health, we should be quick to remove or limit apps.

The “numbers” can be a hard thing for teens — how many likes they get on a photo, how many comments they get, or how many followers they have. Teen girls especially can get obsessive about it which is unhealthy. Talk to them about how numbers can be deceiving. Just because someone has 1,200 followers and another person has 300, doesn’t mean that they’re a cooler or better person, or a better friend. Numbers don’t always translate to authenticity. Followers don’t equal real friends. And it’s better to have one really good friend than 2,000 Instagram friends or followers. As for likes and comments, just because someone doesn’t comment or like your photo doesn’t mean they don’t like it. They could be doing other things while scrolling or maybe they didn’t see it at all. Perhaps explain that just because they post something doesn’t mean all their friends will see it (thanks to the Instagram algorithm!).

Many teens feel pressure to post photos and videos that are just as beautiful as the ones they see from professional influencers, vloggers and TikTokers. But what they don’t see are the multiple outtakes, camera equipment, Ring light, and photo editing that goes on behind the scenes. While someone might look happy, free, and perfect in a picture, we only see a tiny fraction of their day. And while those pictures might look beautiful, that certainly isn’t real life. We share more behind the scenes in our course to help give perspective about the social media world.

What other topics would you like us to cover when it comes to phones and social media? If you’re looking for a safe account for your daughter to follow, be sure to share DoSayGive Teen! It’s like DoSayGive but for the next generation and we share clothing finds and inspiration for teens!

Do you have a teenage daughter? Or a friend, sister, or cousin who does? Be sure to click here to learn more and sign up for our Etiquette Essentials for Teen Girls course today! 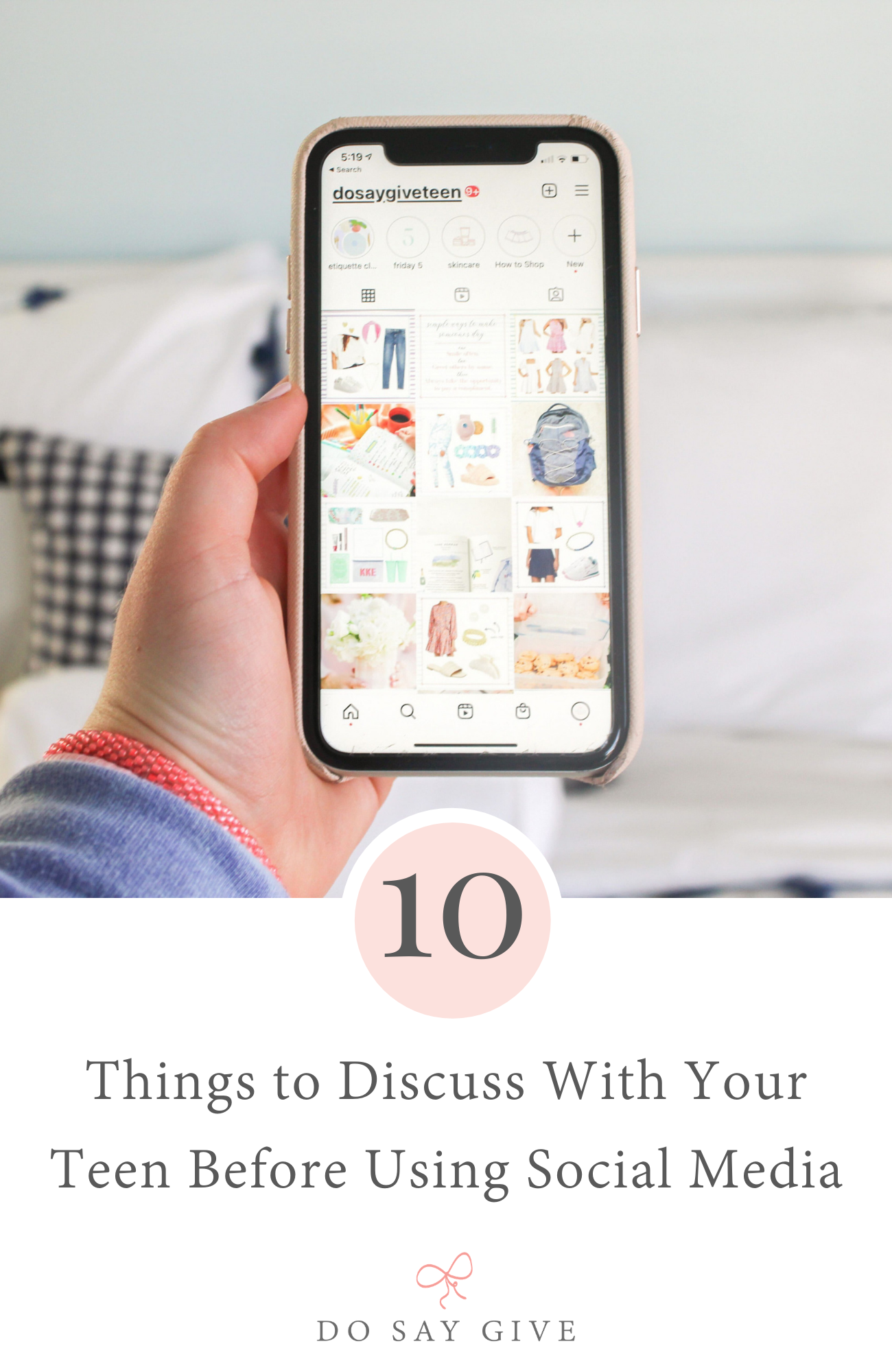